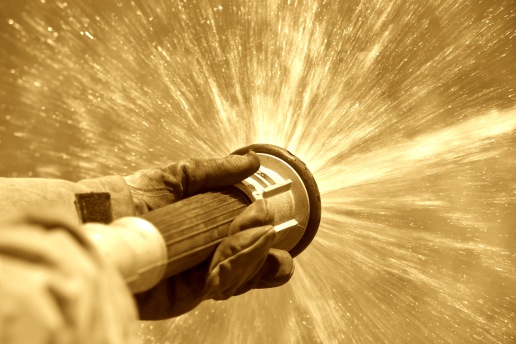 The night had just the right amount of snow dusting over the sidewalk; the tree branches sparkled like glitter. Nikki worked hard all day baking the perfect cake for her ‘hot fireman friend’ – Dave. They met in the usual way, had been texting since. Now things were really starting to heat up.

Today was his birthday and he’s working at the firehouse. Well, the cake isn’t the only thing Nikki was trying to perfect today. She made sure her hair and nails were done flawlessly; picked out her sexiest black button down top with lace and a short tight skirt with a slit up the side. Like a present to be unwrapped, under her clothes was a hot new teddy that she picked out for his eyes only. And the black strappy heels were like putting a cherry on top.

When Nikki arrived at the station she noticed the lights were off in the back and no one in front. She texted her friend to let him know she was there. Walking toward her, Dave smiled wide and his eyes screamed desire. It was just the reaction she wanted. As she handed him the cake, he reached his arms out more for her rather than the confection.

Fumbling through small talk and backrooms, Dave wrapped his arms around her and drew her in. His lips sought hers; kissing with such passion, the must-have-you-now type of kiss that shivers went through her body, making her weak to his touch. With each kiss, his fingers ran up and down her spine, and Nikki melted into his body.

As the other firemen slept upstairs, Dave laid her down, still kissing her and unbuttoned her shirt to bare heavy breasts. Her nipples were hard and inviting. His lips moved slowly from her mouth down her neck and to those 42DDs that were calling his name. All the while, Dave’s hands were working her into frenzy under her skirt.

Nikki had her own hands busy, working his zipper down and getting his pants off. This was no easy task, as she was on the verge of exploding all over his fingers. She wrestled to get on top of him and then …

Twisted Sister here — whew, is it hot in here, or is it just me? We’re cutting this a little short right now so the fine folks at WordPress don’t shut us down. For more meat, check out Mandi over at Yellow Mama.

Another Jersey girl, Mandi Rose is a single mother mom who does good things for lots of people, and has a soft spot for kids. Her work has appeared in Yellow Mama and around Twisted Sister. Mandi lives to write and have her voice heard.