Holy Crap! Was this some sick twist of fate? Melinda sat on the toilet seat, listening to the chaos that were her five boys; each finding their own way to torment her. Currently there was an argument brewing between her two eldest about the TV remote.

“Stop bickering over the remote” she cried out through the closed bathroom door, knowing full well it would fall on deaf ears. Melinda could hear her third child motoring along the hallway with his hot wheels, on the hardwood floor, again—she sighed.

The eldest boys’ argument began to escalate, “Michael? Please go tell your brothers that if they continue to argue I am going to sell the TV!” She listened for the cars to stop moving on the hardwood.

“OK Mommy”. His little feet padded their way to the living room. Beside her the baby monitor crackled, the twins that she hoped would sleep a good afternoon nap had yet to settle as they intermittently howled and played in their cribs.

The twins’ lack of sleep was the least of her worries, though. Melinda looked down at the stick in her hands, two very distinct lines in pink on the display proved positive. Truly, she hardly needed at test to know she was pregnant, again—this particular time by way of calculated risk. Maybe it had been the bottles of wine? Or the fact that they’d finally gotten away from the kids for some much-needed couple time. Either way they’d taken a chance. Had luck been on their side? She wasn’t exactly sure at the moment.

Melinda dropped the pregnancy test in the trash, stood and washed her hands in the sink, then checked the mirror. She pulled herself together. There was no use making the kids worry, she could do that on her own. For a second she began to feel excited and thought she should call her husband Brian on the satellite phone to tell him the news, but then she remembered. The uniform at her door, the signed missing in action paperwork from Brian’s superior, both had arrived almost a month ago. She doubled over.

Would it always be like this, she wondered? Every time something happened she’d instinctively want to share with Brian, the terrible pain in the pit of her stomach would remind her of her incredible loss. God she hoped so. The pain would serve as a constant reminder to make sure Brian remained a big part of her boys’ lives.

Just before she left the washroom, she gave herself a hug and shook off her sadness. The boys needed strength above all. She opened the door and stepped out of the washroom.

“Mommy? Are you okay? Were you crying?” Michael had returned from the errand she’d sent him on to quiet his brothers. Such a sweet and observant child, she thought. He was her sensitive one, always kept a beat on how people were feeling in the house.

“Yeah baby, Mommy was crying. I miss Daddy something fierce.” She replied, picking little Michael up from the floor and holding him tight against her.

“You’re squeezing me too tight” he wiggled out of her arms, so she let him down easy.

“What did the boys say when you told them I was going to sell the TV?” She asked.

“They said okay, but see how much they fight then,” Michael shrugged and began playing with his cars again.

“I guess I’ll let the TV live to see another day,” she laughed at her boys’ counter tactic. “I think I’m going to go call Auntie Cass, maybe I’ll ask her to come for a visit and stay for a while.”

Melinda’s sister was an artist, she’d travelled all over the world. As far as the boys were concerned she was the coolest Aunt ever.

“Now hold on, she hasn’t said yes, I still have to call and ask.” She chided.  Melinda’s eldest son Thomas, walked down the hallway, “Is it cool? We keeping the TV?” he asked, all skinny jeans and baggy shirt, with wild hair and a typical red-spotted teenage complexion.

“For the time being, but every day is a bonus,” she said tartly.

“And did I hear Auntie Cass is coming?” he asked, “To stay?”

“I hope so, I’m thinking it would be nice to have some more estrogen in the house to combat all of this raging testosterone,” she laughed.

Before her eldest went into the washroom, he stopped and he searched, stopping at her eyes, which she thought might still be a little swollen and red.

“Everything OK Mom?” he asked

“Yes… No, I mean not really, but it will be.” She shrugged a little, “I promise”

Thomas walked into the washroom, and as she walked away she heard “Oh, damn” and then “I’d like a little sister for a change.”

As a social worker, Lisa Washbrook is a survivor of all kinds of things, but especially life. She prefers to see the glass half-full, and can be found at https://whatdifferencewemake.wordpress.com/ 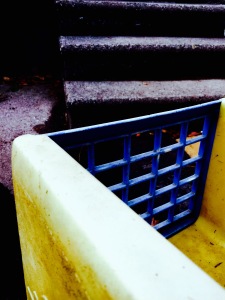