Marlon James’s A Brief History of Seven Killings is structured around the quasi-mythical attack against Bob Marley in 1976, just weeks before elections and two days before “the Singer” was scheduled to play the Smile Jamaica Concert. Seven gunmen stormed his house spreading death. Marley survived, performed at the free concert, but then fled Jamaica.

One of the many unique aspects of James’s novel is that it essentially lacks a clear protagonist. There is a vast number of characters parading the novel, each one expressing a multitude of thoughts and emotions, in an authentically idiosyncratic way. Nonetheless, as I was travelling through the narrative (spanning several decades and unfolding in several different places), I couldn’t help but identify with the character of Nina Burgess; or Kim Clarke; or Dorcas Palmer; or Millicent Segree. They are effectively one and the same person, at different times and places, with a common goal: escape Jamaica, escape violence.

Having experienced her mother’s rape and coming perilously close to being raped herself (by none other than “Babylon”; the Jamaican police), Nina becomes desperate. Her accidental dealings with the Jamaican underworld leave her vulnerable, and abandoning Jamaica is the only way out. As Kim Clarke, she acquires the holy grail that is a visa to the United States. It comes at a price, though: she must submit to the sexual advances of the bureaucrat dealing with the paperwork, and the final stamp on her visa comes with his “stamp”. Kim is ready for the American Dream, ready to depart with her American boyfriend. But, lo and behold, mere days before the flight to freedom, he reveals that he never meant to take her along, and he was only looking for some good time.

Eventually Nina – Kim; Dorcas; Millicent – makes it to the United States and starts a life as a caregiver and then as a nurse, managing to escape violence (at least that directed at her; Jamaican victims of gang wars keep pouring into the ER of the hospital she’s practicing). But others are not so lucky. Marlon James doesn’t attempt to beautify the reality faced by Jamaican women, in a world where the line between police and criminals is very blurry indeed. Nina’s shape-shifting from one reality to the next one, assuming one identity after another, is not only a narrative necessity. It also functions as a trope echoing throughout A Brief History of Seven Killings, and this trope is none other than the ever-relevant issue of loss of individuality.

Just like with any oppressed group – whether in terms of ethnicity, class, gender or sexuality – women in James’s novel are not seen as individuals by most of the men that surround them; they are seen as “women”, which in the context of the novel is little more than “a bloodcloth rape waiting to happen.”

Indeed, this is the only reason Nina avoids being assaulted by the Jamaican policemen who insist on taking her home at night: by becoming an individual, with a unique voice, catching them off guard. While the men keep toying with her, insinuating all sorts of things, attempting to feed the power-and-control mechanism that is hidden behind sexual crimes, she finally has enough: “If you going rape me, rape me already and leave me in whichever ditch you leave woman. Just stop bore me with your r’asscloth mouth”, she says and the policemen, taken aback, lose interest and take her home without harming her.

Ultimately, it is difficult to describe exactly what A Brief History of Seven Killings is about. It is about a lot of things, and yet it is about neither of them. It is about Bob Marley, Reggae, and Rastafarianism, and yet none of these elements become too important in the greater picture. It is also about the CIA, drug cartels, and Jamaican politics, and yet it is again not properly defined merely by those. In essence, Marlon James’s novel is as ambiguous and malleable as the characters filling its pages. But perhaps this is a sign of all great masterpieces: they become what their reader wants them to be.

You can find A Brief History of Seven Killings on

From Chapters Indigo: A Brief History of Seven Killings was 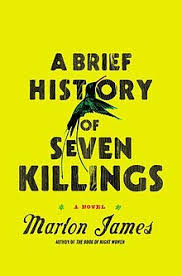