This is Angela here — I recently connected with Latitude 46 Publishing at local writer’s festival, and was thrilled to purchase Along the 46th — a collection of short stories by writers with ties to Sudbury, Ontario. For those that don’t know, Sudbury is a gateway to Northern Ontario, and originally an old mining town, with a ‘rough around the edges’ appeal. Life in the north is starker, and in some ways more real. Stories in the collection include a dog show on a First Nations reservation, a story of working in a northern gas station, Tina Siegel’s Isosceles and one of my favorites, The Killer Beneath Me.

Excerpt from ‘The Killer Beneath Me’

Once you get the routine of jail down, it becomes simple and then very quickly monotonous. Every day is the same: the walls, the bars, the smells, the food … day after day, week in, week out. The only thing to hope for is your range gets new inmates who were smart enough to pack their assholes full of contraband before getting arrested.

Wednesdays were big days for new arrivals, because most trials and plea deals were heard on that day. You could almost guarantee we’d get two or three fresh fish come up from court, and if the Hoosegow gods were smiling on us, one of them would have a package.

It was on a Wednesday, while Dean and I were playing cribbage, a tall skinny kid with a cropped green mohawk walked into the day area.

Within a week he’d be airlifted to Sunnybrook trauma centre in Toronto.

Excerpt from The Killer Beneath Me by Rob Dominelli, originally published in Along the 46th, Latitude 46 Publishing www.latitude46publishing.com

Thoughts on Writing from Rob Dominelli

I became interested in writing as a kid and was inspired by my older brothers comic books like Spider Man and The X-Men. I started off by creating my own comic books (SuperBobby saves the day!) but quickly learned I was not a very good artist. I got into Stephen King novels in my teens and enjoyed creative writing classes in high school. unfortunately, I got into drugs around the same time and fell in with a crowd that looked down on academic activities such as writing, so I gave it up.

I spent a great deal of my twenties and early thirties in prison for drug-related crimes, most of that time spent in the Sudbury Jail where there was little else to do but read. I attended a creative writing classes hosted by the John Howard Society while awaiting trial in 2007 and re-discovered the joy of writing. After the course was finished I began writing short, horribly offensive stories to amuse the other prisoners on my range, and they really enjoyed them and encouraged me to keep writing.

When I was released I started attending open mic/spoken word events at a local bar where I read my stories aloud. I met other creative people and shared my work with them, which is eventually how I got published.

I’ve been told many times that my story The Killer Beneath Me feels real, and I think that’s because I based it on real events I witnessed over several . Not that it’s a true story, but the characteristics, mannerisms (and mental issues) of the people I describe are borrowed from several different men I met in jail and kind of “frankensteined” together to create fictional characters.

This may sound absurd to some, but I don’t plan out my stories. I don’t use notes at all, I simply write what I know. For instance, I knew I wanted to write about my time in custody, particularly about the other guys I met inside. For The Killer story, I started out with the idea of being locked in a small cell for twelve hours a day with a delusional alleged murderer, how it felt to live with his madness, how I came to accept him and gradually even began to like the guy despite it all. Like I said, I began writing what I knew, and then asked “what if?” Using this approach, it doesn’t matter what your experience in life has been. You could be a surgeon or a gas bar attendant or a convenience store clerk. Write about what you do, and then imagine a “what if” scenario.

Now, you may use the method I describe above or you may have another approach, but I’m also going to offer what I consider to be universal advice if you want to be a successful fiction writer: Read a lot and write a lot. When you write, don’t write to please others, write to please yourself. If you write to please other people, you’ll lose the truth of your fiction and find the process completely joyless. Worse than that, your readers will not be able to identify with what you wrote as well and most likely lose interest in the story altogether.

Along the 46th is available for purchase through Latitude 46 Publishing, be sure to drop by to see this and other fine works. 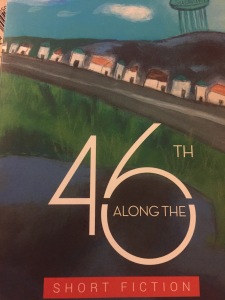