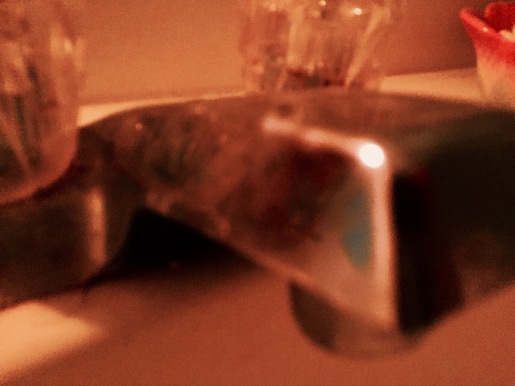 The water was hot and fragrant, galaxies of bubbles twirling on the surface. Steam clouded the mirror and the window, and I breathed coconut and Hawaiian blossom as I climbed in.
The plug rose slightly, and a glug of escaping water made me sit up.

“Damn leaky plug,” I muttered, groping for it with my fingers. Instead of the familiar metal ring, I felt hot jelly-like tentacles, and squealed, whipping my hand out of the water.

“What the hell!” I shouted, sloshing water over the side as I jack-knifed my knees upright, tucking my feet close.

Deep within the bubbles, it pulsed.

“Oh my God!” My eyes bulged as a black suckered arm drifted towards me in the water. “No!” I prepared to leap out, but slipped and crashed back down with a huge splash. I groaned as the pain radiated around my back, and the tentacle wrapped itself around my ankle.

“Help!” I screamed, although I was alone in the apartment. Ben had gone to visit his mother, and the kids were at school. I pulled back, my fingers slipping down the side of the bath, my heart racing as I realised the tentacle was tightening.

What the hell was this? An octopus in the drains? Impossible! The grip around my ankle constricted like a boa in the Amazon. I reached down and tried to loosen it, using frantic fingernails to scrape it, scratch it. It wound even tighter, and my foot throbbed.

“Ouch goddammit!” I yelled, panic making my throat tight. “Get the hell off me!” I was kicking and thrashing now, water sloshing everywhere.

The tentacle began to pull me towards the plug. The water was nearly all gone now, and I was flailing in a lukewarm puddle, smacking my palms down in terror.

“No! No!” My fingers squeaked on the ceramic as they fought for grip, my nails cracking with the force.

Already, my big toe was at the grill of the plug, and for a bemused second I wondered what was going to happen. Then I screamed a note I had never before reached, as the tentacle gave a tremendous wrench and managed to explode through the plug hole and a large section of the bath. Staring down into the new hole, where the bath splintered and cracked into nothingness, I believe my mind slipped. Down there was a thing nobody could ever explain, a massive, black, writhing mass which had a single rolling eye, an eye which stared insolently up at me, and seemed full of malicious intent. It was evil, that eye, and full of thrill to have caught me.

The thing whip-flicked its tentacle and I was yanked down into the darkness, landing right on top of the soft mass, bubbles frothing and squelching where my skin touched it. I could feel it bulge beneath my weight, like a flaccid hot water bottle. My foot disappeared into its maw, and I screamed in new agony when there came a crunching sound as hard parts hidden within the creature’s softness tried to crack my ankle bones like Christmas nuts.

I beat it hysterically with my fists and free foot, the thing undulating and rippling, undamaged and undeterred by my fight.

“Help me!” I gargled, choking in my sheer panic, trying to pull my trapped foot out of that terrible mouth. I lifted an elbow and aimed for the eye, plunging with as much force as I could. My elbow hit and split, and the creature let out a loud wail, opening its mouth and allowing me to yank out my damaged foot.

I rolled off it, landing on my knees on the concrete floor of the cellar, cutting my skin on shattered bath fragments and twisted shards of split piping. I scrabbled to my feet, backing well away from the twining tentacles. Dragging my eyes away, I stared frantically around for a weapon, and found a broom. Grabbing it, I held it aloft and began to beat the thing, raining down blow after blow with the business end. I punched in with the bristles and dragged the thing’s flesh as hard as I could, leaving rake marks. It screamed like an injured child, and shrank into itself. The tentacles pulled in like frightened spider’s legs, and then the jelly began to split and an odious yellow custard-like fluid began to splatter me. Senseless, I beat it and beat it, the handle of the broom slick with yellow sludge, great splatters in my hair, streaks whipping across my face.

I didn’t stop until it was pulverised and mashed into glistening chunks, and I was finally satisfied it was dead. I dropped the broom with a wet thwack, and put my hands on my hips, panting with the exertion.

I pushed my hands through my hair, shuddering with the vileness of what had happened. The yellow stuff had glued my fingers together, and I had to pull them apart one by one. I walked bare-foot across the cellar floor, and over to the wooden staircase at the far side of the house. All the time I searched the shadows, just in case there were more of them.

I climbed back up into the house, aware that I was moaning and unable to stop. After locking the cellar door behind me I stood and took deep breaths, listening to the trees swishing in the afternoon breeze, focusing on how the sunlight arced through the kitchen window. Ben would be home soon, and the bathroom was a mess. I touched the crusty yellow gloop on one arm and grimaced. If only I could have a long soak in a hot bath.

The thought made me feel sick. Never again.

Carolyn Ward is working on her first novel, fuelled by biscuits and generally in agony from standing on Lego.  She lives in Wolverhampton in the UK and is @Viking_Ma because a dentist informed her that she was once a Viking.  Yes, it was literally that weird. 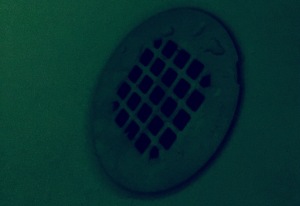