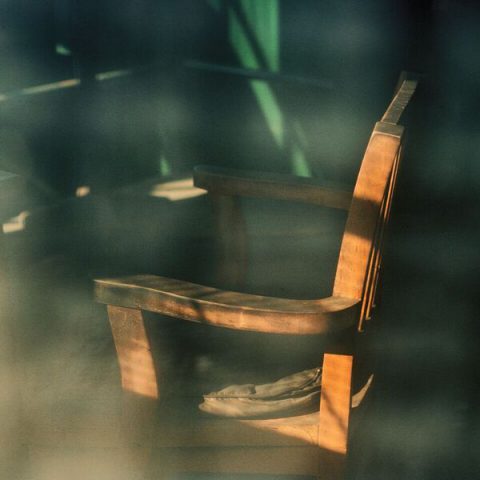 Missy sat handcuffed to each of the cold wooden arms of the chair, and a wide strand of duct tape placed over her mouth. Just to make a point she twisted and turned her wrists to cause as much ruckus and noise as possible.

“Silence!” her so called hero spoke through his gritted teeth. “If you weren’t so bloody noisy I wouldn’t have to tie you up in the first place!”

Sargent Johnathan Burns stood eerily still and peered out the window which was covered in horrid gingham curtains. HIs strong frame braced for action, ears perked as he listened.

“No one is out there,” Missy mumbled through the tape.

Sargent Burns turned, scowled and hissed, “You don’t know that. It’s my job to keep you safe until the trial.”

After some time, and considerable silence, the noticeable stress left Burns broad shoulders. Eventually he holstered his gun and walked towards her.

“Sorry about that, but it’s not my fault that you couldn’t keep quiet,” Burns took a key chain from the pocket of his warn out jeans and unlocked each of the handcuffs. She stood, feeling the vulnerability of the situation, which caused her temper to flare.

“I’m going to take off the tape now, it might sting a little.” With a flick of his fingers, the edge of the tape came loose, and one quick pull took off the first layer of Missy’s skin.

“Owww you son of a bitch!” Missy cried out, slapping Burns right across the face leaving a red mark on his cheek.

“That’s for handcuffing me to the bloody chair, and taking off my skin with that damn tape!” She yelled. Even madder because he hadn’t even flinched.

“Listen L-i-t-t-l-e M-i-s-s-y, I don’t care if I have to tie you up everyday but Sunday. As long as I do my part in keeping you safe and ready to testify at that trial.” He stood, taunting her to try something more.

Oh he made ever bit of her blood boil. Missy balled up her fists. “We are in the middle the of mosquito infested wilderness with absolutely nothing and no one for more than two hundred miles.”

“You don’t know that” He countered, “Someone could very well leak the safe house location. So I will do what I have to do to maintain a safe environment, capich?”

Missy stepped closer and growled, “I will not be handled.”

Burns stepped in as well, “Yes, you will.”

In an instant her hand went up again, but Burns was ready this time, catching her wrist mid-swing. Frozen in that pose Missy searched his eyes. He glared back, nostrils flared. Anger flashed across his vibrant blue eyes, a flicker of indecision and then a brief glimmer of heat followed by lust. Jesus, she wondered if anyone had ever told him how expressive his eyes were. He’d be an awful poker player.

They were mere inches apart.

How long had her chest been heaving?

Missy stepped into him, tilted her chin up. The heat from his breath warmed the air between them. His scent was a mixture of fresh soap, the outdoors, and the cleaner he’d used early as he polished his gun. It was unsettling.

Burns extinguished the space between them, leaned in and kissed her with utter abandon. Slowly he let go of her wrist, she took the opportunity to rake her hand through his soft hair. His hands began roam all over her body and she wondered whether they would even make to the bedroom.

Abruptly Burns stepped away. “We can’t do this, I’m putting you in danger,” his eyes displayed considerable worry.

Deflated and unsteady on her feet she couldn’t decide if Burns was more infuriating or intoxicating.

“I know you believe that, but no one is going to come looking for me. I am just an accountants office administrator testifying in tax evasion. It’s not like I worked for the mob.” She smiled. Sure he understood. But Burns eyes spoke of a different reality.

“The mob?” she asked. She didn’t need him to answer, the look on his face said it all.

“Shit,” Missy sat down in the chair. “If I’d known that I would never have agreed to any of this. I am literally a walking and talking target,” the gravity of the situation was daunting.

“I’m going to do a perimeter walk, please go up to the loft and bring up the ladder.” He placed his hand on hers, “I thought you knew. I’m sorry.”

She did what she was told, there was nothing more to do. After taking up the ladder, and laying it down on the floor of the loft Missy looked at the books on the little shelf beside the bed. Nothing appealed to her, but she took one out anyway. Leafing through the pages, she listened quietly, but heard nothing.

Sometime later, Missy awoke, she must have dosed out while she waited for Burns and half read the book. She sat up, scooted to the edge of the bed. Listening, she could tell Burns was not back from the perimeter check. How long had she been asleep? The clock on the night stand now flashed, had it been doing that before she wondered.

She placed the ladder back and went down the steps carefully. If only they’d hidden her in a five star hotel or resort, she wouldn’t have to go outside to an outhouse to pee. Without a second thought she opened the front door of the cottage and walked the fifty yards to the outhouse, when she opened the door though, she screamed, stumbled over her feet and fell back.

There sat Burns, slumped over with a single gun shot in the middle of his forehead.

“Finally, she emerges from her throne.” A tall man she had never seen before stepped out from behind the small wooden structure, dressed in city finery, a leather jacket, fancy jeans and pointed loafers. In his hand is a large gun, suited with a silencer.

“I had no idea who the case was against, I’m sorry, I promise I won’t testify…” Missy stuttered.

“You’re right about that Little Missy, you won’t be testifying this time” Leather coat man raised the gun. Missy saw only darkness, and registered the funny sound a gun makes with a silencer attached.

Brookelynn Berry is the kind of writer who brings out the sexy in all kinds of things, including mob hits. You can check her out at brookelynnberry.wordpress.com/