It was the light that terrified me.

It flooded through the gaps between the door planks, slicing into the darkness of the cellar: searing light that escaped from the storage room to form a tableau of bone-chilling familiarity. I hadn’t felt such dread since I was a nightmare-prone little girl. But this was neither déjà vu nor nightmare. This was real. The stench of mold. The chill that tightened my scalp and set my teeth to chattering. The thrush-thrush of blood pulsing in my ears. The taste of fear.

“Vanessa?” My voice died in the echoless emptiness. I had never been here before, but I knew this door, and knew with sickening certainty what I’d find behind it. My lips contorted into a rictus grin and I shivered.

In the nightmare version I’d written to spook myself and any future readers, the door had opened without human agency. The skin on my arms tightened into gooseflesh. I held my breath. Nothing happened. This was reality. I had to reach out and plant an icy thumbprint on the wrought iron latch.

A snick, a tug, and the door reluctantly swung out, the hinges sighing with regret. Wafting out, a sickening odor my brain refused to identify.

She lay naked on the cement floor, eyes closed, arms demurely crossed over her breast, legs splayed apart. A red necklace glistened at her throat and pooled beneath her, forming a cruel parody of a valentine heart.

My knees buckled. I staggered against the doorframe, nearly blacking out. I distantly heard a gasp, a sob: sounds that could only have come from me.

My eyes squeezed shut. My mind did sickening somersaults. I choked back the urge to vomit. Just hours ago, I presented a version of this scene to my writing group. It was to be the opening chapter of a murder mystery I’d just begun.

How could this be? How could my fiction have become fact? Had my scribblings dictated my friend’s destiny? The idea was repugnant, appalling. I groped for a simpler explanation. Maybe future events had wormed their way into my brain, their foreshadow somehow infecting my writing.

More urgently, who killed Vanessa? A random stranger? Someone from her past? I knew so little about her. I needed to dig into her background, explore her deepest secrets. I had no choice.

If only I hadn’t shared those few pages with the other writers in my group. Once this murder was splashed across the media, they’d be eager to reveal what they knew. How could I possibly defend myself? I had written my own indictment.

Before calling the police, I had to violate my friend’s privacy. I left the storage door ajar and climbed the stairs to the darkened kitchen, where Vanessa’s briefcase sat on the counter, her laptop tucked inside.

I dug into my purse for my flash drive.

This excerpt is from the novel A Murder Foretold by David Wolf.

David Wolf is a man of two lives — his outer life is filled with friends and family and work as an ad man, with award-winning TV, radio and print ads that amused millions of people and helped sell tons of products; while his inner life is devoted to strange and wonderful characters driven to desperate or preposterous acts. David’s novel, Mindclone (available on Amazon) is a near-future look at the amusing and serious consequences of brain-uploading; A Murder Foretold will be available soon. You can connect with David at https://authordavidwolf.wordpress.com/ 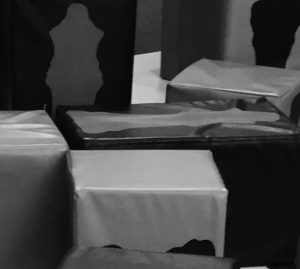