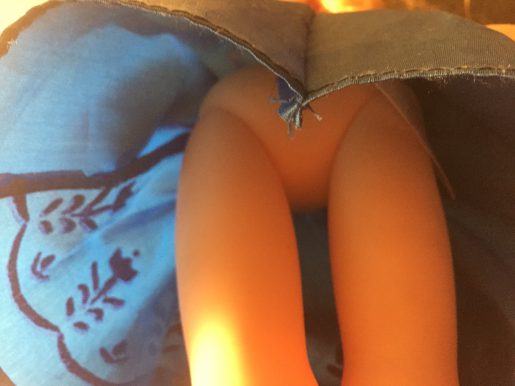 And there he stood, right there in the good old United States of Amnesia, at the corner of Soap Scum and Mildew, in the sweaty, sheet-sticking, rotten egg smelling cozy little suburban town known as Slumbering Meadows, Pennsylvania, population 2,032.

He stared long and hard at the STOP sign. He cupped his ear and listened intently. But the sign told him nothing.

It just stood there, cruel and imposing.

All the same, no one paid any attention, because the cars didn’t even stop. Maybe some of them paused a little, if that.

There were people walking around too. Men dressed in business suits and carrying briefcases, kids with basketballs heading to the courts, mailmen, furniture movers, Jehovah’s Witnesses going door to door, couples with strollers casually dressed.

There was something wrong with this town.

Nobody had what you could call a normal head. Instead they all had a pair of fat ugly buttocks. Instead of eyes, a nose, and a mouth, all you could see was a face with a big long vertical crack. The most you could say was that the healthier specimens had rosy cheeks.

Our hero approached a cop.

The officer scratched his big hairy cheek. Then he levelled his crack at our hero and said, “Brrrrrr–rrrrruuuuuuuuppppppp!”

“But I don’t understand,” said our hero. He couldn’t understand why the policeman’s breath smelled so bad either, but he decided it was best not to say anything about that.

A little old lady came along walking her dog. “Puuuuuuuurrrrr,” she said, with her tight withered little cheeks. “Puurrr—puurrr–puurr!”

But the confused young man still didn’t understand. And when he looked at the teeny white dog, which he supposed was probably a toy poodle, he saw a tail where the head ought to be. The miniature monstrosity had two tails (at either end), and they were both wagging!

The barber, white robe and all, stormed out of his shop. Gesticulating wildly with his scissors, he waggled his flabby round pumpkin butthead at the cop and said, “Brrrrrrrrr!”

“But I don’t understand,” insisted the poor fellow with the “normal” head.

Just then the town drunk was staggering down the street.

“Pppfffffuuuuuuuuuutttt!” he said to the cop, and then the lumpy gravy diarrhea cascaded down his shirt. It was really disgusting, especially the way he looked like a human waterfall.

“Brrrrraaaaaaccccckkk!” barked the barber, and one, two, three, the big cylindrical turds slid out of his crack.

And then the deluge started. All and sundry pointed their big hairy cheeks in the general direction of the confused young man and let him have it.

He couldn’t take it anymore. He had to get out of this place.

He didn’t care much for the town of Slumbering Meadows or its residents. As far as he was concerned, they were all a bunch of assholes.

Remington Murphy received his B.A. in 1980, and his M.A. in 1983, both in English from Temple University, where you can’t major in English anymore. In the 80’s he edited the Magic Bullet Science Fiction Anthology, then in the late 80’s/early 90’s he ran R.E.M. Press, which gave him an opportunity to publish some fine poets he met in graduate school, such as Sylan Esh and Michael Graves. In 1990 he published his own poetry chapbook, “Courting the Black Widow,” and then in 1993 he had a full length book of poems published, “Fear of Vision” (Arkada-Arch, New York). He has also published a collection of masques (e.g. short dramatic pieces written in verse), “Boogaloo” (Mellen Poetry Press, 2004).