“Yo smurfs, let’s get smurfed up.” A blast of Ontario winter air followed Colin as he squeezed into the back of a Honda Accord. Two butts slid across splotchy upholstery to make room. “It’s super smurfy to see my bestest smurfs again.”

A moon face in the passenger seat swiveled to interrogate the new arrival. “What the hell you learning at college, eh? I know that’s not how they talk in the States.”

“It’s how my fraternity at Dartmouth talks. It’s like a secret code that no one can understand.”
“No one can understand you, that’s for sure. But if that’s a code, then I’m the Dalai Lama. All you do is replace every other word with ‘smurf’ or ‘smurfy’, know what I mean?”

“Whatever. I know what I’m saying.” Colin threw his arms around two necks and defied the cramped physics of the mid-size interior for a group hug. “I’m just totally smurfed to be getting smurfed up with my smurfiest smurfs.”

A finger jabbed into Colin’s chest. “Listen, buddy. We’re going to meet everybody at the Goosed Moose. They’re all home for break. We’ll chill, drink some beers, and have a good time. Cut the smurf shit out. You talk like that, I’m kicking you in the nuts.”

Colin clutched his crotch and curled into a protective ball. “Not my smurfs!”

A baker’s half dozen beers into his evening, Colin turned to the woman next to him. “How about you and me get our smurf on?”

“You know, go smurf crazy. Smurfy-style. Smurfalicious.”
“I’m not sure if I should pump your nose full of mace or fall on the floor laughing. Get lost, buddy.”

“How about I smurf my smurf all over your smurfs?”

A beefy hand landed on Colin’s shoulder, and squeezed like a blood pressure cuff. A hamhock of an arm twisted Colin on his barstool until he was nose-to-chest with a black Goosed Moose Hospitality Staff tee-shirt. “Listen buddy, you’re back in Canada, eh. We stomp on the privates of anyone who harasses women. And … I’m not sure if you’ve done that. Can’t understand a word you’re saying. Laura, can I get a ruling?”

The tattooed barista shrugged. The foam heads on two beers wobbled. “Hell if I know. Let’s put it to a vote.”

A small blue woman in a white hat jumped on top of her table. “Smurf that smurfer-smurfer outside and smurf the hell out of his smurfs.”

Caleb Echterling wishes he could spend all his waking hours playing Q*bert. He tweets funny fiction using the mysterious handle @CalebEchterling. You can find more of his writing, as well as his rants about perfidious woodland creatures that steal tomatoes from his garden, at www.calebechterling.com

(Ed. Note — In compensation for this story Caleb now has a couple cold ones waiting for him down at the local bar. Before you all start hopping on the interstate, remember, we’re up in Canada, and the roads are still pretty bad. You might wanna take your snowmobile instead.) 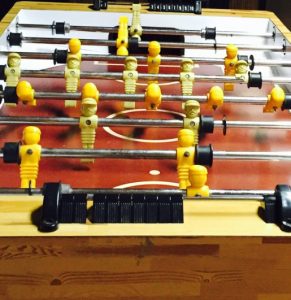