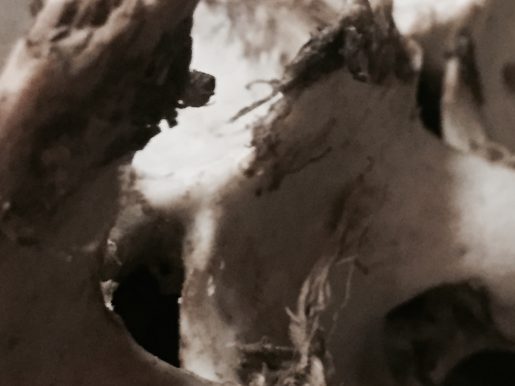 “We need him in bits before we can move him. He’s never going to fit in the car all in one piece and I’m not driving along with a fucking body propped up in the back seat wearing sunglasses and a hat like he’s drunk and we’re on our way home from a party.”

“What, because that would be too messed up but dismembering a corpse to make it easier to pack into the boot of the car is fine?”

“No. None of this is fine. Believe it or not, this is absolutely not how I intended to spend my evening, but when it came down to it either he was going to get to keep breathing or I was, and it sure as hell wasn’t going to be him. The rest was just poetic justice. He deserved it. That’s a risk people take when they decide to break into someone’s house to murder them. He brought it on himself. He made a choice. And here we are.”

“You know when I said ‘I love you and I’d do anything for you’? I really didn’t imagine this scenario.”

“Look, if you’re done, just go. It wasn’t my fault this happened and it wasn’t my fault you showed up at the door when you did. But I need to deal with this so if you’re not going to help, tell me now and I can do it on my own. Again.”

“We could just call the…”

“Oh my god, if Mother heard you say that! I am NOT calling the fucking police. They won’t help anyway, they won’t fix anything and I’ll end up in prison because I fucking killed someone and I am not up for any of that.”

“But it was self defense. You didn’t have a choice.”

“Yeah, that might work if there had just been a struggle and I was lucky enough to come out on top but I don’t think it’s going to wash when they look at the body and realise I tied him to a chair for three hours and pumped him full of LSD. And they might wonder why he’s missing all his teeth. And his tongue. And his fingers. And his left eyeball.  And where those electrical burns came from. I don’t think I get to play the self defense card in this situation.”

“Fine. I’m here. I’m helping. We’re going to need tools though. Big tools. And something to keep any… stuff off the inside of the car. Did you seriously have to torture him like that? It’s really messy.”

“Yes, I did, thank you very much. He wasn’t exactly here to have a nice cup of tea with me. Everything I used to show him the error of his ways? It was kit he brought with him. He planned to do this TO ME. And even worse, he was going to do it to me to get at HER. We had a little conversation before I distracted him with the cattle prod and he told me everything. He got really descriptive when the acid fully kicked in, really fucking eloquent. So fuck him. This was never going to be a ‘one sharp blow to the back of the head’ kind of scenario. He brought it on himself.”

“OK, I don’t mean he didn’t deserve it. Just that it would’ve been easier if we didn’t also have to think about how to clean all this up afterwards. I mean, there’s blood on the ceiling. How did you even manage that?”

“And how come Mother is fine with getting rid of the body but she’s not fine with coming here and helping with this bit?”

“I tried, I asked, but she says she owes me one favour and anything more than a straight up disposal would count as additional favours and then I’d owe her. I’m not getting into that again. It’s alright for you, moving away and getting married, but I’m the oldest and she’s never gotten over me not wanting to follow in her fucked up footsteps. This is all well and good once in a while, when it’s necessary, but it’s not a career path I want to be on. She loves it, the crazy bitch, but it’s too much stress, too much hassle for me. And I seriously cannot be doing with those fucking pigs. Speaking of which, his teeth are already out but we need to get rid of his hair before we deliver him or she’ll start whining about how they can’t digest hair and I can’t handle any of her shit tonight on top of all this.”

“I didn’t realise she was still so hard on you about not wanting to go into the business. I thought she was sort of alright with it, or at least as alright as she ever is with anything.”

“She pretends to be when it suits her but then out of nowhere she gets all ‘I’m getting too old to run this on my own and the boys are useless blah, blah ,blah’. She keeps pointing out that if I worked with her, we’d be able to deal with situations like this a lot more easily and she goes mental when I tell her that if she’d chosen a different line of work, I wouldn’t be at risk of this shit happening in the first place. There’s no talking to her though. I told her I wanted to change my name so assholes with grudges wouldn’t make the connection and she totally lost her mind. God, she’s annoying!”

“OK sis, chill. Focus. Do we start with the saw or what?”

“No, we need to break some bones first. It’ll make the rest easier. Grab that hammer and we’ll start with his back. It’s heavier work than you’d think and it’s a bit grim but the worst is over once you crack the spine.”

Tanya Simone Simpson is a writer and photographer living in Scotland and on the internet. Fuelled by coffee and an obsessive nature, Tanya writes poetry, fiction and autobiographical over-share. You can connect with Tanya on Twitter @TanyaSSimpson and through tanyasimonesimpson.com