On the street, teenage girls unite in the shadow of dark anonymity
Stray lives measured by unbearable moments they can not begin to tame
Toward the N train they trudge along with the youthful stance of awkwardness
Giving in to lies and schemes, their innocence ceases, flailing in a flame

Within the urban landscape, fading light interweaves through a garden gate
As the city rests, the girls pass like migrating animals coming home
Petals and spikes, strewn with the dust of twilight captivates their bloodshot eyes
Righteousness drives them on, plagued by bittersweet, feverish angst in the bone

Their numbered survivors, merely nameless statistics, abused by neglect
With the end of patriarchal  guidance, home’s no hiding place for daddy’s prey
Across the punished ground morality crawls over the sludge of  disgrace
Be good girls, silent, dutiful daughters of injustice, a role forced to portray

Their entire search for integrity sends nubile imaginations prowling
With ability to confuse childhood memories, new desires and misplaced guilt
Yet again asking those haunting questions that can only be answered by time
And collapsing the sacred foundation on which their parents myths were built

Teresa Ann Frazee is a writer and has been a visual artist for over thirty years, with juried  and international exhibitions including solo shows in galleries, museums and other venues, receiving many awards and honors. As a writer, Teresa’s work appears in countless publications, including Literary House Review, Skyline Magazine, Poetry Shelter, The Horror Zine, Twice the Terror, Aphelion, Black Petals, and Mused.
Inside her world of make-believe, Teresa paints and writes what she knows to be true. Bound by the creative force, she leaves reality entirely up to you. You can connect with Teresa through
www.frazeefinearts.com 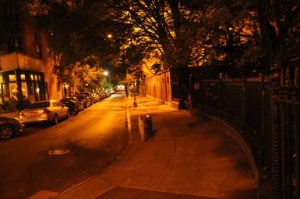