Sure, it’s not like she had a lot of friends.  Or was even remotely popular.  Goth artist brandishing a sketchbook, you could say she was kinda cool.  But not at this school, social pariah hanging out with other misfits was more like it.

Still, she had friends.  Or used to.

Like Sammy, whose purple-inked doodle in her sketchbook kicked the whole thing off.  Purple hearts, BFFs, XOs.  They were inseparable.  Went to all their classes together, partners in PE.  It was their only defense against them.

Every high school has them.  The popular crowd.  Those who are ‘in’ and those who wannabe exist just to make life iserable for those poor suckers who don’t stand a chance.

If she and Sammy were lucky, they were simply ignored.  They survived that way for years, eating packed lunches under the stairs outside the library, so they could get a head start on studying during their lunch hour.

She drew, filling her sketchbook with black-inked drawings.  Other geeks joined them, and they’d sit at the long tables talking about the latest WoW adventures.  The librarian nodded at the no-talking rule, relieved to have somebody using the library at all.  They went undetected; all the cool kids were out having a smoke anyhow.

Until her final year.  It was one of the wannabes that started it.  Chris Clarence snapped a photo during the lung capacity science lab, her lips pursed and face puffed out blowing up a balloon.   One trip through Photoshop later, she’s sucking an enormous cock.  Of course, it went viral.

Next day at school she walked down the hall to catcalls and illicit offers.  They called her Blow Job, BJ for short.  Six months later, the nickname still stuck.

Six months of running to class after the bell, so she wouldn’t see anyone in the empty halls; hiding in the washrooms; enduring snickers and giggles as she walked into class.  Six months.  And now she’s done.

Art class was the tipping point.  She slid her latest charcoal sketch over for Sammy to gush over – the shading was killer, if she did say so herself.  Sammy promptly started doodling on a blank page, cutesy hearts and arrows.  When Terrance Shorn asked to see it too, Sammy didn’t think, and just handed the sketchbook off.

She coldly took the book and slid it into her backpack.  Didn’t want him to see her cry.

Sammy said to tell the teacher, or try to draw everything again.  Maybe get a new sketchbook.

She shook her head.  It’s gone far enough.  Time to take matters into her own hands.  And besides, the teachers never did anything anyway – not when she was shoved into lockers, her backpack snatched and tossed about, not when whistles and calls of BJ followed her down the halls; not for the million little barbs she faced every day.  Nothing.

Sammy was surprised when she said she wanted to go to the Valentine’s formal, that they could go stag and hang with the few brave geeks who dared cross the threshold of cool.  Sammy agreed, secretly thrilled to try on satiny dresses and parade in high heels.

They were busy in the short weeks leading up to the dance.  She and Sammy went shopping, bought fancy dresses and tried various hairstyles and accessories.  Sammy chose a tiny sequined clutch, she decided on a substantial shoulder bag.  Sammy tried to convince her of her fashion blunder.  She held tight to the big bag.

While Sammy scrolled through pictures of the latest updos and nail trends, she surfed darker corners of the web.  She searched for recipes involving household chemicals, stuff lying around the home and garden.  Box of nails, sack of fertilizer, leftover plumber’s pipe.

When she and Sammy arrived that night, the Vice Principal conducting bag searches raised an eyebrow, and let them pass by.  Sammy waved her tiny clutch at him, and she gripped her bag tighter.  Standing off to a corner, Terrance was holding open his suit jacket to a rent-a-cop, saying he didn’t know what was in the silver flask, must be his dad’s.

The gym was decorated with streamers and balloons, posters from the Student Council were taped to the cinderblock walls – Happy Valentine’s!  Friends forever!  Be mine!  All you need is love!

At the refreshment table a trio of bored-looking teachers stood beside a table lined with chips and an enormous punchbowl, obviously guarding the punch.  Students straggled across the dance floor, couples wrapped around each other while small groups danced together.

The popular crowd was already here, and the wannabes were hanging on.  Air kissing, fake tans squealed over fresh manis.  Guys flexed muscles and straightened ties.  No hope for any of them.

Chris Clarence looked like a gorilla in pin stripes, Katie Simpson was his date.  She wasn’t even looking at him, eyeballing somebody across the dance floor instead.  Katie stole her gym clothes back in grade nine.  Bitch.  A couple was slow dancing, already sucking face.  She couldn’t tell who they were.  No matter.

She smiled.  It’ll all be done soon.

Sammy waved at a couple of friends, and asked if she wanted to dance.

She had to put her bag down first.

See, I told you it’s too big, Sammy said.  What do you have in there anyway?

Nothing, she tucked her bag under the bleachers.  Let’s dance.  They joined the geeks on the dance floor.

Dancing with thumping bass, surrounded by friends, no matter how nerdy they were, she was actually enjoying herself.  Surprise.  Sammy’s arms waved in the air, her updo a rat’s nest in the heat.

But she had to carry it through.  She glanced at her watch.

Soon, she started rubbing her temples.  Said she was getting a migraine.  Sammy was disappointed when she begged off, saying she wanted to go home.

Sammy looked concerned, and held George Greirson’s hand.  They’d been making eyes at each other for months.  Looks like George finally got some balls.  She invited them both back to her place, an odd thing to say if she had a headache.

Sammy looked at her funny.  No thanks, I think I’ll stay here.  Are you OK to go home by herself?

She nodded, and walked toward the exit, leaving her shoulder bag under the bleachers.  Sammy didn’t notice, her eyes were on George.

That was the last she saw of them.  Of all of them.

The explosion followed soon after, echoing off identical suburban houses.  Neighbours wrapped in housecoats stood on their front stoops watching the sky light up, dark smoke streaming into the night.

She was about a block away when the first sirens screamed by, firetrucks with flashing lights.  Red strobes painted the houses ghastly pink.  She kept walking.  Cop cars, ambulances.  More firetrucks roared past, she didn’t bother counting anymore.

She took off her shoes on somebody’s front lawn, left the broken heels lying there, and walked home in tattered nylons.  The sky glowed crimson-rose behind her.

Even though she used her step-mother’s laptop, it wasn’t long before they found her.  The Vice Principal, who managed to escape with just a few cuts and bruises, said he saw her enter the dance with the bag.  Thought nothing of it, the girl’s always carrying books around anyway.

“Dinner’s ready!” a hatch in the steel door slid open and a tray appeared, dotted with multicoloured goop.  Pink plastic spoon.  “Aren’t you gonna take it?”

The tray slid onto a ledge, balancing precariously.  The hatch slid shut again.

She remained sitting on the cot, industrial mattress sagging under her weight.  She looked up at the window, sunlight streamed through the bars.  Imagined drawing them, dark on light, shadows and shading.  And smiled.

Blow Job.  She blew them away, alright.

Liz McAdams is a short, sharp, writer living in the wilds of Canada with her black cats and her laptop (the wifi’s pretty good in the boonies). She loves themes of loss, love, and change – all with a twist of something else. You can connect with Liz through https://lizmcadams.wordpress.com/ 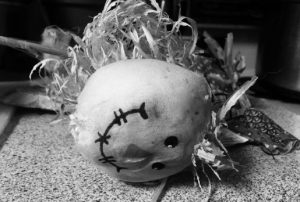