A Play in Two Acts

The play opens with Trixie, and her older sister, June, laying prone upon a tall canopy bed, looking through some old photo albums.

Both ladies burst out laughing.

What?! Oh, God, no! I hated it! That’s why I tried to be so hard to be good. How in the world could you have enjoyed that?!

in a hushed voice]

Now, if you’ll excuse me, I’m going to get my hairbrush.

June exits the room, leaving Trixie to fret over the most humiliating punishment

their father had ever administered. She returns a few moments later, toting a

Despairingly, Trixie reaches down to grab the hem of her swing dress, lifting it

nylons. June climbs up onto the bed and extends her right leg so that her foot

nearly touches the footboard. She then tucks her left leg off to the side.

Slipping her fingers inside the waistbands of her pantyhose and panties, Trixie

tugs them down below her knees. She then hobbles over to the bed, and lays prone

across the mattress, so that her thighs rest upon June’s upper right leg. June

then proceeds to thread her left leg between Trixie’s knees, just above the

tangle of her underwear, effectively pinning her sister’s right leg. As June

shifts to gain greater leverage, her skirt rides up past the point of discretion.

Aroused by shame, and shamed by arousal, Trixie resigns herself to her sister’s twisted judgment.

June proceeds to apply firm, deliberate strokes with the hairbrush.

for Trixie to explain herself]

down with renewed fervor]

June pauses to examine her sister’s bottom, cringing at the myriad, oval-shaped

welts that distress its full expanse.

As June administers the remainder of Trixie’s punishment, Trixie’s cries of

point of no return]

Trixie is reduced to a half-naked heap of spasms and sobs, soaking her sister’s

lap with the release of her intimacy. June bears silent witness for well over two

bottom as she cries herself out. Several more minutes pass before Trixie begins

to regain her adulthood.

afternoons over my lap.

this goddess of yours, I will expect you to come here straight from work, each and every Saturday, so that I can give you another spankin’. Is that clear?

Alright, then…Straighten up your delicates, and get ready for church.

June releases her hold upon Trixie’s right leg, thus enabling her to get down

from the bed. With her panties and pantyhose still in a bunch, Trixie

makes her way towards the upstairs bathroom. June stifles a laugh as she

watches Trixie waddling across the floor in her “stylish yet liberating”

behind the bathroom door]

tonight? My rear end is killin’ me!

June gives Trixie a gentle kiss on the forehead, and follows her

out of the room. 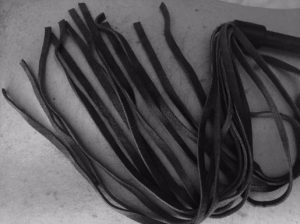