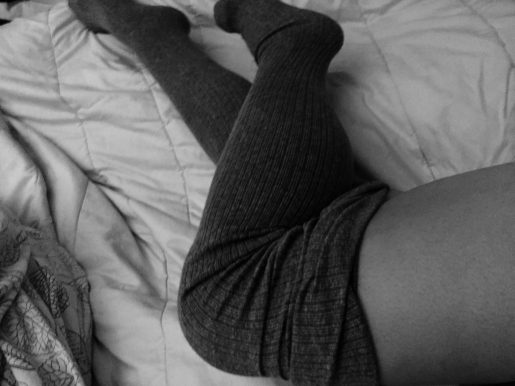 On Saturday, Trixie went to visit her older sister, June, who lived on the other side of Bangor. Having chatted for the better part of an afternoon, they both decided to look through some old photo albums, and so, Trixie followed her sister up the stairs, till they came to a modestly-appointed spare bedroom. Upon entering, Trixie immediately recognized the tall canopy bed from their parents’ house, where she and their four younger sisters still resided. Mom and Dad had given it to June when she and Roy first got married.

Having retrieved the albums, June carefully placed them near the foot of the bed. Then, they both proceeded to slip off their shoes and climb onto the mattress, laying side by side so that their stocking feet could rest upon the pillows. Once Trixie had assumed a comfortable position, she let her hands run along the chenille fabric of the bedspread, which she also recognized from the old house. Her mind began to wander as she plucked at the countless nibs on the spread.

“So, what is it that you’re trying to get at, Trixie?” June inquired. The feel and scent of the heirloom quilt had taken her to a warm summer night some seven years prior, when she and June had found themselves in a very similar position, albeit under far less pleasant circumstances.

On the night in question, the two sisters had just returned from a party at their friend Belinda Mae’s house, nearly two hours past their curfew. For as debaucherous as the evening had been, both young ladies knew to expect a firm reprimand when they got home. Sure enough, Mom and Dad were waiting in the living room, ready to confront them as soon as they walked through the door. Dad could hardly hold his temper as he asked his dallying daughters whether or not they were alright. When they both answered affirmatively, he told them to get upstairs.

Trixie and June had dressed nicely that evening, in grey flannel skirts with lace crinolines, pink linen blouses, and sheer nylon stockings. Trixie recalled how she and June had stumbled up the stairs that night, stepping out of their heels the moment they set foot inside their bedroom. When Dad came up a few minutes later, he made a point of leaving the door wide open. “Why weren’t you both home by eleven o’clock?” he questioned.

Try as they might to explain, neither June nor Trixie could offer a reasonable testimony. “We’re sorry, Papa. We had so much fun at Belinda Mae’s party that we lost all track of time!”

“Have you two been drinkin’?” their father asked, his tone becoming alarmingly familiar.

“Umm…umm…maybe just a little.” Trixie blurted out, regretting the words even as she uttered them.

“Well, that settles it. I’ve heard enough!  If either of you thought you were too old for the strap, think again, because you’re both gonna get it!!”

The “strap” was a thong of caribou hide, just over three feet long. It was smooth and supple, and sorely impressive. Grandma Nancy had gifted it to Dad for Christmas one year. Young as she had been, Trixie could still recall Grandma declaring, in her typically humorless fashion, “You’re gonna need this, Harry. Trust me. Caribou’s just the thing for girls. Isn’t that right, Nancy?” Trixie turned to catch her mother blushing from head to toe. Noticing Mom’s visible embarrassment, the elder matriarch continued, “Yes, she’s all too familiar with this strap. Why, if Nancy had a dollar for every time her father or I had to blister her rear end with it, she’d be the richest woman in Bangor!”

“Momma, please!”  Trixie’s mother implored, as Grandma went on to elaborate further, “The strap’s wide, without being too heavy, so it stings a whole lot more than it marks.”  Mom and Dad exchanged knowing glances as their daughters winced in unison.

Trixie recalled how she and June had pleaded with their father that night, urging him to reconsider their sentence. Trixie had already turned 19 by then, and June was going on 23. It had been well over a year since either of them had conceded to any sort of corporal punishment, and the thought of being strapped well within earshot of their younger sisters seemed utterly mortifying. “Please, Papa!  Not the strap!” his two grown daughters wailed.

“Not another word!” Mr. Jenkins admonished. “Now then, ladies. You both know the drill. Get your skirts up, and your drawers down! I don’t want to see anything between you and this belt.”

Trixie could see their mother standing in the doorway, alternately cringing and nodding in approval. The fact that she was still subject to the strap remained one of the worst-kept secrets in the Jenkins household. Despite their abject protests, Trixie and June did as they were told, tearfully baring their bottoms before laying face down upon the bed. Trixie shuddered to recall the awful thwack of the belt, as it stung both of their rear ends simultaneously. The cadence of the strap was soon reinforced by the anguished percussion of stocking feet, drumming the bed in despair.

“Trixie?  Trixie!  Anybody home?!” June’s insistent voice slung her sister back to reality.

“Oh…umm…I’m sorry…which photo were we looking at?” she faltered, vainly attempting to conceal her chagrin.

“What’s gotten in to you, girl?” June asked perplexedly. Just then, Trixie noticed her legs thrashing against the mattress.

“From the way you’re carryin’ on, I’d swear you were bein’ spanked!”  As Trixie struggled to regain her composure, June gave her a good-natured swat on the behind.

“Owww!! Damn it, June! That hurts!” cried her little sister, grinning conspiratorially until they both laughed out loud.